This is the original text of the article that appeared in the Mail on Sunday on 25th Jan 2015. 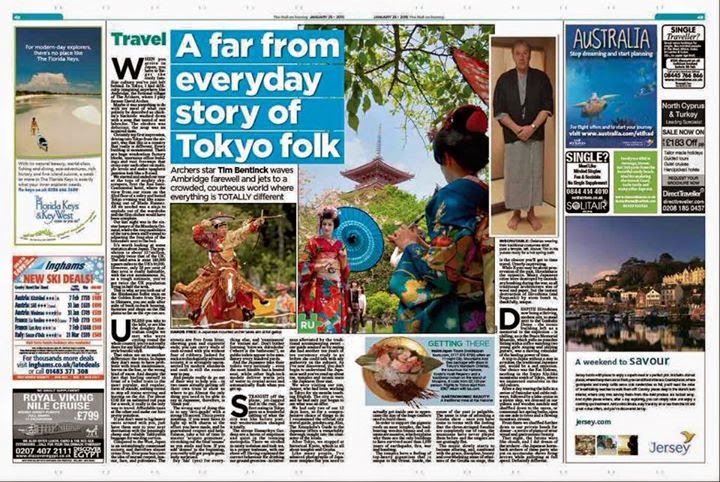 Arriving in the far east for the very first time, it’s soon hard to imagine the very different culture you’ve come from. We were arriving in Tokyo, and the doubly far away location I was having trouble imagining was Ambridge, the fictional village of ‘The Archers’ - home of my farmer character, David Archer. At the same time that David’s namesake Blunkett was giving us outstanding publicity by announcing (yet again) that he had stopped listening (in this case because our Archer family are thinking of moving to Northumberland) I was unwittingly eating chicken sphincter washed down with a soup that tasted of wet Labrador. The chicken was delicious, the soup was an acquired taste.

Everything about Japan appears at first completely different, then, just as you think you’re getting used to it, you realize that it really is completely different. One’s first impression, driving into Tokyo from the airport, is that every building is monumental – huge windowless factory blocks, enormous office buildings that look like Transformers, vast freeways that cross over each other on multiple levels that make spaghetti junction look like a B road. We started and ended our tour at the tops of mighty skyscrapers, first the Ana Intercontinental, where ‘Lost In Translation’ might have been filmed. The view from our room on the 42nd floor of a sultry and humid Tokyo evening was like something out of  ‘Blade Runner’. All we needed was a Ninja to explode out of the wardrobe and the film clichés would have been complete. Our last night was in the 6 star luxury of the Mandarin Oriental, where the turn-down service adjust the feng-shui of the binoculars next to the bed. Between these two earthquake-proof colossi, we found very different kinds of Japanese architecture.

It’s worth looking at some statistics about Japan. The population is around 127 million, roughly twice that of the UK. The land area is 375,000 km2  to the UK’s 247,000, however, only 28% of that area is habitable, the rest is mountainous; so as a rough estimate, you’ve got twice the UK population living in half the area. This is why, as you look out of the Shinkansen bullet train onto the flat plains of the Golden Route from Tokyo to Okinawa, to either side it is mile after mile of back-to-back housing, factories and shops as far as the eye can see. So unless you take to the hills, or like the doughty Australian couple we met who were cycling round the whole country, you’re not really there for the bucolic idyll if you head south - but Japan has a whole lot more than that to offer.

‘Japanese trains run on time’. Yes you can tick that pre-conceived notion, they do. They don’t seem to have problems with track maintenance, leaves on the line, or the wrong kind of snow, and despite the fact that hurling oneself in front of a bullet train is the most popular, and regular, form of suicide, nothing seems to stop all trains arriving and leaving on the dot. For around £150 for an unlimited rail pass for a week, it really is the only way to travel - affordable taxis at the other end making car hire pretty pointless. If you don’t want to lug heavy cases around with you, just have them sent to your next destination with the amazingly cheap and reliable Takkuybin baggage forwarding service.

Compared to the west, Japan is an astonishingly consensual society, and therefore almost crime-free. Everyone buys into the idea of mutual respect, honour, face, and politeness. The streets are free from litter, chewing gum and cigarette ends; you can carry wads of cash around with you without fear of robbery (indeed for such a technologically advanced society, it is strangely unconnected by modern standards and cash is still the easiest way to pay) and people really do go out of their way to help you; in two cases actually getting off their own train to show us where to go. Almost the only word you need to know in Japanese therefore is ‘thank you’. The wrong way of doing this is to say ‘Orri-gaado’ with a strong US accent. This is the familiar form and unless pronounced correctly, pretty insulting. If you want faces to light up with charm at the effort you have made, and guarantee respect and helpfulness, take a bit of time to master ‘arigato gozaimas’ stretching out the final ‘aaaaas’, smiling and bowing the while. If you add ‘domo’ to the beginning, you really will get people genuinely surprised. Say ‘hai’ for everything else, and ‘sumimasen’ for ‘excuse me’. You’ll hardly need ‘toire-wa dokudeska’ as public toilets appear to be mandatory every hundred yards.

The Japanese take their toilets very seriously, even the most humble loo has a high tech seat that, depending on the model, does everything from simply being heated  to delivering warm jets of water to crucial areas and automatically flushing when you get up. Just be warned, the first time you press the ‘douche’ button you’ll be astonished by the accuracy of the aim, and if the water heating is faulty, you’ll hit the ceiling.

I would really recommend having your trip organised by a company that knows what it’s doing, in our case Inside Japan Tours were amazingly efficient and thorough. One piece of invaluable advice they gave us was to hire a thing called a PuPuRu, which is a WiFi router that’s permanently connected to the 4G system. This means that for £2 a day you can wirelessly connect your laptop, pad or smartphone to it and not pay any data roaming charges. Very useful.

Straight off the plane, jet-lagged and in the rain, our first outing in Tokyo was a wonderful inkling of what the city was like before the post-war westernisation changed the country completely - a visit to the peace and serenity of the Hama-rikyu Gardens, a haven of emptiness and quiet in the teeming metropolis. There we strolled in misty isolation and took tea, in a proper teahouse, with our shoes off. Having explained the proper behaviour for drinking our ground green tea, its bitterness alleviated by the traditional accompanying sweet, our guide amazed us by saying she had another ten years of tea ceremony study to go before she could talk with any authority on the subject. As I’ve now discovered, you don’t begin to understand the Japanese until you’ve read up about tea, temples and tatami mats.

We were visiting our son, Jasper, who had been working in Tokyo for the past six months teaching English. The city is vast and he had only just begun to see what was on offer - we only had two of our twelve days here, so for a comprehensive choice of things to do, I hand you over to www.gotokyo.org . Also, The Xenophobe’s Guide to the Japanese is a remarkably comprehensive and thorough insight to their character, and Jasper’s blog about food is sensational – http://.goo.gl/mDTH7n . With the 2020 Olympics looming, Tokyo is welcoming  tourists more than ever.

Kyoto is all about temples and Geisha. The difference between looking at photos of a Japanese temple and being inside one is the weight of the roof. Even in a Norman Cathedral, the sense of monumentalism is more to do with the space and the walls. In order to support these gigantic temple roofs, the wooden beams and columns are massive, which explains why these are the only buildings to have survived more than a thousand years of earthquake, fire, war and bombing. The simplicity of the humble home by contrast, derived from the spirituality of the tea-house, has always been a temporary structure, but the temples have a feeling of top-heavy gigantism that is unique to the Orient. Inside, the sense of the past is palpable.

The same is true of  attending a Geisha show. Once you have come to terms with the feeling that the three-stringed Sanshin  are completely out of tune, the musicians have never played them before and the singers are ear-gratingly flat, the music slowly  starts to become alluring, and, combined with the grace, discipline, beauty and overwhelming sense of other-ness of the Geisha on stage, this is the closest you’ll get to time travel – nothing has changed. Utterly captivating.

While Kyoto may be about preservation of the past, Hiroshima is the opposite. Many Japanese cities were totally destroyed by incendiary bombing during the war, as all traditional architecture was of wood and paper, but the instant destruction of the two atom bombs is, thankfully, unique. Despite Hiroshima now being a thriving, modern city, to stand next to the Genbaku Dome, the iconic building left as a memorial to the explosion, is chilling, as is visiting the Peace Memorial Museum, which pulls no punches whatsoever. Sitting with a coffee by the river watching two young girls singing and playing guitar was a moving reminder of the healing power of time.

A trip to Japan without a stay in a ryokan, the traditional Japanese inn, would be a sad omission. Our night in the Kai Hakone, nestling in the Swiss Alp-like mountains, was to immerse ourselves in the old culture. Having spent the day touring the hills in a series of funicular and cable railways, followed by a lake cruise in a pirate ship, we dressed in our yakuta and wooden sandals and shuffled down to the onsen, or communal hot spring baths, open on one side to trees and a flowing mountain stream. From there we shuffled further down to dinner, served in our private booth - a series of plates of utter visual and gastronomic beauty. That night, the futons were like clouds, and my dreams were of Japanese Horseback  Archers, but these were bowmen from Kamakura, not displaced dairy farmers from Ambridge.

For a full description of our trip, with photos, have a look at the previous post on this blog.
Posted by Tim Bentinck at 10:40 1 comment: